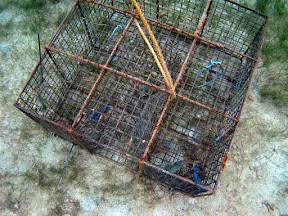 According the UN, over 70% of the world's fisheries are classified as over exploited. Overfishing is thought to be the single biggest threat to marine ecosystems according to Green Peace. The use of exploitative and destructive fishing practices on coral reefs is a globally extensive problem. Indeed, species extinction due to overfishing dates earlier than that by all other factors, including pollution, water quality degradation, and climate change. [1] Despite its reputation as an early, destructive anthropogenic influence on coral reefs, overfishing is still a growing problem. The global fishing effort has steadily increased since 1970[2] with no signs of abatement in the near future. The largest factors behind the unsustainable rate of fishing include inadequate fishing regulation and a rapid increase in the efficiency of commercial fishing vessels.

This incredible decline in fish populations in recent history has been driven in part by increased efficiency of commercial fishing equipment. Fishermen have become more and more skilled at killing more and more fish because their livelihoods have depended on it, but this dramatic uptick in innovative fishing practices has pushed the fishing rate past the point of unsustainable. The second factor worth mentioning is the inadequacy of fishing regulation and law enforcement. Fishing is inherently a difficult practice to regulate. It is difficult to keep tabs on fishing vessels and monitor exactly how much fish each vessel catches. With the current system in place for reporting catches, it is very easy for a fisherman to forge information about the number of fish caught in a given season.

The exploitation of coral reef fisheries is largely due to increased demand on the global market for reef fish. Fish grow scarcer, prices for fish grow higher, fishermen grow more desperate and destitute. [3] The issue of overfishing is therefore difficult to mitigate as it is intertwined with global economic and population growth and increasing demand on a global scale. With such a pervasive driver as the economy, a range of twenty to fifty years would be necessary to change the culture and trend of overfishing, even if strong efforts to stop the issue were to begin immediately. Alternate sources of income would need to be provided and incentivized in order to convince lifelong fishermen to change their habits. Beyond the issue of income, however, is culture. For overfishing to cease to be the dire issue it currently is, entire cultures would need to be shifted. For some peoples, fishing is an integral part of the way of life. Attempting to get fishermen to change the technique and frequency of fishing is a long-term and difficult task. [4] Even as fish populations are depleted and global catch declines, fishing pressure continues to increase. This decline in fish only serves to raise the price for the few that are so effectively sought out and caught. [5] Based on catch data and estimates for increasing rates of fishing pressure, it is estimated that if overfishing continues without intervention, the world's fisheries will collapse by 2048.[4]

The recent use of technology in fishing practices has also accelerated the rate at which fish are removed from reefs. Modern fishing instruments such as sonar and GPS make it much easier for fishermen to locate and catch huge schools of fish. The use of huge, industrial fishing vessels, with the capacity to access a larger area and hold great amounts of fish on board, has also increased the rate at which fish are removed from the environment. Scientific research has also benefited fishermen in raising the effectiveness of fishing tactics. Knowledge of the breeding habits of certain species allows fishermen to catch a large amount of fish in a short period of time with little effort. Unfortunately, fishermen often catch fish before they have the chance to spawn and reproduce, which hurts both the species and the fishermen in the long term. [6] As overfishing continues to lower fish population sizes, there is an increasing need for more efficient technology and greater fishing pressure, which creates a cycle of destructive fishing that is difficult to stop.[7] One of these destructive methods is blast fishing- the dropping of explosives into shallow marine habitats to indiscriminately shock and or kill fish for harvest. Though it is an effective way for fishermen to secure a large catch, it often results in a significant amount of by catch and destruction to the surrounding reef. Fishermen that have a more specific catch in mind employ a different tactic: cyanide fishing. This strategy takes advantage of divers with bottles of cyanide that can be squirted into areas identified as hiding spots for large fish, generally grouper. [8] The poison shocks the fish, slowing their reflexes and allowing the fishermen to bring them to market while still alive.

Overfishing of reef environments has significant impacts on ecosystem function. The removal of top predators leads to explosions in the populations of lower level consumers. These consumers then overgraze on corals and coralline algae and cause coral abundance to decrease. Eventually, as more slow growing corals are removed, fast-growing seaweeds and macro algae can overtake the environment, replacing coral [9] . However, a stable population of herbivorous fish is necessary for healthy ecosystem function and overfishing of herbivorous fish can also have profound ecosystem effects. Sufficiently dense populations of grazing fish and sea urchins are necessary because they abate non-coralline algae growth, which in can hinder coral growth when in excess.[9][10] A recent study published in Fish and Fisheries, focused on parrotfish, found that a divided management strategy could protect diversity in complex reef areas and increase overall numbers of fish. The study suggested that fishing for parrotfish should be prohibited on areas of the reef with massive and branching corals, where they play an important role of algae-grazer. Fishing could then be allowed on flat areas of the reef dominated by soft corals, where algal grazing is not as crucial. [11]

Heavy fishing and harmful fishing techniques also have the capacity to do great damage to reef structures. The use of explosives or chemicals as well as some netting and trapping techniques damage coral substrate. Dynamite fishing and cyanide fishing are predominantly used in reefs in Southeast Asia. It is estimated that 56% of reefs in Southeast Asia are at risk as a result of these destructive fishing practices.[12] The damage done to the coral substrate and the habitats of coral fish and creatures also continues to make them more vulnerable to stresses such as overfishing or destructive fishing.[1]

Generally, coral reefs exhibit an inverted biomass pyramid, made possible by the external recruitment of a number of larval fish species. In the past, management efforts have predominantly focused on bottom-up processes, including the importance of herbivorous fish populations on abating harmful algae growth. However, increased fishing pressure has altered trophic level interactions,[13] necessitating the additional consideration of top-down processes when developing management strategies and practices. Some even advocate for management practices that have goals other than maximizing predatory and herbivorous fish stocks, focusing instead on higher cover of settlement-inducing crustose coralline algae to maintain the ecological and structural integrity of reefs.[14] However, the most widely recommended policies are those that advocate for management with multiple goals on an ecosystem scale to predict and avoid possible cascading effects.[1][15] In contrast, small-scale management practices are often made difficult and ineffective by the large-scale connectivity inherent in coral reef ecosystems, necessitating an increase in the scale of management, and specifically a network of interdependent reserves to maintain biodiversity.[16]

Media:Overfishing.pdf A handout describing the different methods used to overfish in St. John and the Caribbean

Media:OverfishingSong.pdf Lyrics to an original song by Klio Stroubakis about invasive species and overfishing. Watch the video here!!!