The prospect of finding a new drug in the sea, especially among coral reef species, may be 300 to 400 times more likely than isolating one from a terrestrial ecosystem[1]. 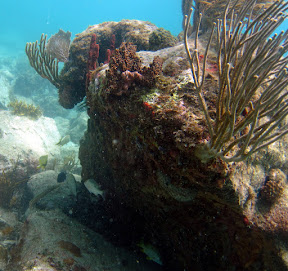 Coral reefs are wondrous underwater communities teeming with life and possibility. One of the many ways coral reefs can benefit us is through medicine and pharmaceuticals. 40-50 percent of our pharmaceuticals come from natural resources, mostly terrestrial and often found in rainforests [1]. Currently under-represented, marine compounds have the potential to make up a large part of these pharmaceuticals. The marine ecosystem represents 95 percent of all biodiversity on earth with a majority of that percentage taking place on coral reefs. Thus the majority of our drugs are coming from only five percent of the much larger biodiversity we could have access to [2]. It's estimated that we are 300 to 400 times more likely to find the next drug in the ocean, especially coral reefs, compared to finding one in terrestrial ecosystems. Oceans contain not only the majority of the earth's biodiversity but also much larger amounts of phylogenetic diversity. These underwater organisms use defense mechanisms, excrete chemicals, and essentially wage war with bioactive compounds unlike anything found on land [1]. With so much ocean left undiscovered, it’s easy to imagine a plethora of cures just waiting to be found. Coral reefs, the rainforests of the ocean, are even more likely to hold the next cure or drug resource.

As early as the 14th century, eastern cultures recognized beneficial properties of coral reef ecosystems. One example is the use of seahorse extracts in China, Taiwan, and Japan for sexual disorders, pain, skin problems, kidney and liver diseases, circulatory and respiratory problems. However many seahorse populations are being rapidly depleted as demand for seahorse in traditional medicine grows. Seahorse populations declined by 50 percent worldwide between 1990 and 1995, showing the great need for conservation and protection of the marine environment [1].

Using reef organisms for their medicinal properties even traces back to the times of Hippocrates and Plato in the west. Hippocrates and Plato believed snail mucus helped with pain relief “related to burns, abscesses, and other wounds”. Snails have continued to be used to help with various medical problems, including for external dermatological use in the 18th century [3].

Peter Moeller from NC State University recently discovered a sea sponge that naturally fights off bacteria that could possibly be used to fight infectious diseases with antibacterial resistance, like MDR-Tuberculosis. He was snorkeling with colleagues in the Caribbean when they noticed a sponge thriving in a clump of dead coral. Moeller studied the sponge more closely and realized that it was using a type of biofilm to protect itself from bacteria. This biofilm actually has the capability to dissolve the outerlayer of bacteria that makes it resistant to antibiotics [4].

Bone grafts have been created from coral since 1970. Bone grafts are basically bone replacements that one would require if they had a bone disease that caused their bones to deteriorate. Bone grafts might also be used after someone breaks a bone in order to make the bones more dense. Autologous bones, or bones transplanted from other areas of the body like the chin or rib, are traditionally used as bone grafts, but are often in limited supply and depend on organ donors in order to acquire [5].

Coral can be grown in labs and is now being used as bone grafts in place of autologous bones. Coral is very permeable which means that the mortality rate of the bone graft procedure is lowered, because the coral has more of a chance of being tolerated by the body. Recently, a new coral bone graft was created that replaces a bone and then helps that bone regrow together before dissolving [5].

Florida was the first state to initiate cancer research from a marine life perspective. In the 1950s they began to research several molecules found from natural marine wildlife, and in the past 20 years, the US Food and Drug Administration has passed several anticancer drugs of marine origin [6].

At least a dozen compounds that come from marine sources are in trial for use as anticancer agents that could cure breast cancer, liver cancer, and leukemia [7]. One such compound makes up the drug Dolastatin 10, which is isolated from an Indian Ocean sea hare and has the potential to be used for treatment of leukemia, tumors, and liver and breast cancer. While phase 2 clinical trials have already been completed and found lacking in performance against solid tumors, more trials are underway and it remains a good candidate for combination drugs used to fight cancer and the above listed [2].

The US National Sea Grant Program recently discovered a group of antiviral drugs extracted from sponges and soft coral that has the potential to cure different types of viruses including HIV/AIDS. AZT is the name of the AIDS treatment which is composed of arabinosides that come from the sea sponge Tethya crypta. The fatty acid surrounding the sea sponge is made up of compounds that allows it to fight foreign infections. The HIV virus attacks white blood cells and weakens the immune system of humans, and so by using this fatty acid, the HIV virus could be potentially be stopped (Demunshi)[6].

New research shows that an "aqueous extract of Synthecium sp. showed anti-HIV activity and yielded 3 novel anti-HIV proteins."[8] According to O’Keefe and his colleagues, who presented their findings at the Experimental Biology 2014 meeting in San Diego on April 29, 2014, the "coral’s protein bind[s] to the virus and prevent[s] it from fusing to the membrane of the T cell. Without this contact, the virus can’t infect a host’s immune system, as T cells play a direct role in regulating the body’s immunity." [9]

Secosteroids, an enzyme used by corals to protect themselves from disease, is used to treat asthma, arthritis and other inflammatory disorders. Pseudopterosins, a class of natural products, also comes from coral and has anti-inflammatory and analgesic properties. It is now used in skin care products, including products by Estee Lauder [1]. These anti-inflammatory properties are found naturally in a Bahamian soft coral called 'Pseudoterigorgia elisabethae'. There is also research underway suggesting the Caribbean sea whip may have some organic chemicals that help with anti-inflammatory effect on human skin [6].

Others diseases potentially cured by coral include: Asthma and Heart Disease'

Other Uses of Coral

Reef-dwelling cone shells are found to produce venomous peptides that “offer possibilities for controlling nerves, are valuable as biological probes, and can potentially be used for treating intractable pain, urinary incontinence, stroke, epilepsy, anxiety, and high blood pressure” [12]. Clinical trials now are underway and look promising. In controlled clinical trials a synthetic peptide derived from snail venom decreased pain by 53 percent, much higher than the widely-used placebo which only decreases pain by 18 percent [3].

Other medical uses of coral include: Labor pain relief, New drugs, and Ulcers

Getting Involved with Marine Bioprospecting

Today, using coral reefs for pharmaceutical purposes and finding these cures through bioprospecting is becoming more and more popular as diseases evolve and new medicines are needed [13]. Countries like USA, Canada, Japan, Europe, Fiji, India, China, Australia, Philippines, and Hawaii are all experimenting with coral reefs and their potential cures in science research [6].

Organizations like the Convention of Biological Diversity (CBD) have also realized the need for bioprospecting and have created national legislation to help guide how this research should be done. They work to connect bioprospectors to natives who already use the reefs for pharmaceutical practices. With help from the natives, bioprospectors are able to learn what corals have been used for in the past and what approaches work best when it comes to researching the coral without endangering it. For example, article 8 of the CBD states that it is necessary to "respect, preserve and maintain knowledge, innovations and practices of indigenous and local communities embodying traditional lifestyles…. to promote their wider application… and encourage the equitable sharing of the benefits arising from the utilization of such knowledge, innovations and practices" [6].

Unfortunately though, bioprospecting research is still highly underestimated. It is in need of fresh new scientists ready to delve into the secrets of the sea [6]. Do you love to scuba dive? Are you an environmental science major? Do you like helping people? A profession in bioprospecting might be perfect for you!

In the absence of effective management of coral reefs and the resources they contain, many species that are promising as new sources of biochemical materials for pharmaceuticals and other products may be lost before scientists have the opportunity to evaluate them. [1]

Just in the past few years, over 2,000 new compounds have been established from marine sources. Improvements in technology, funding, and collaboration among scientists, researchers, institutions and pharmaceutical companies have brought about this dramatic increase in knowledge about underwater environments. Many compounds have already been put into everyday use while others have undergone clinical trials and still many more are in preclinical stages [2]. In order for these trials to continue and new cures to be found, coral reefs and the marine ecosystem must be protected. Partnership is needed among governments, companies, academia, communities, and locals to invest in research and offer incentives to do so. The need for conservation of coral reef ecosystems requires immediate action and more than what is now being done.